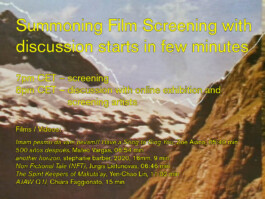 OKTA Collective presents: Summoning, including an online exhibition and film screening curated by Dovile Aleksaite, Lucy Kerr, and Alisi Telengut. The program features international artists working in film, video, writing, painting and photography, and revolves around witchcraft, ritual, and enchantment. The events are based on the premise of the “witch” as it relates not only to women, but also to queerness, wilderness, and pre-modernist and non-Eurocentric belief systems.

Open to the public on Zoom and livestreamed on the OKTA Collective website www.okta-collective.com,

Through explorations of the body and the horizon that orients and disorients it, questions of memory, ancestry, and the rituals that sustain them, the films explore, transnationally, a collective grasping at the buried, the invisible, the unknowable. Featuring film/video work by Zoe Aiano, Yen-Chao, Stephanie Barber, Chiara Faggionato, Jurgis Lietunovas, and Mateo Vargas, followed by a live-streamed discussion with screening and exhibition artists.

Imam pesmu da vam pevam/I Have a Song to Sing You, Zoe Aiano, Video, 05:40 min
At age 6, Ivanka was chosen by fairy women to fall into trance to enter the realm of the dead and learn secrets about the future. At age 60, the spirits left her.

Divlja Kruška/Wild Pear Arts is an organisation founded by Alesandra Tatic, Greta Rauleac and Eluned Zoe Aiano. Based in Serbia, it produces a variety of socially motivated artistic projects throughout the Balkans, often focussing on feminism, witchcraft and the intersection between socio-political forces and everyday experiences.

500 años después, Mateo Vargas, video, 06:54 min
A short city symphony evocation of present day Mexico City five hundred years after the invasion of the Spanish and the fall of the Aztec city of Tenochtitlan.

Mateo Vargas is a queer non-binary Mexican filmmaker and visual artist based in Mexico City. Their multi-media work has screened internationally and focuses on the intersections of identity, borders, and diaspora under the dual legacies of colonialism and late-stage capitalism.

another horizon, Stephanie Barber 2020 16mm 9 minutes
The horizon, where the sky and the earth meet, is always elsewhere, is a promised place where these two elements come together. a metaphor, an orienting, a promise of transition, change, transcendence. a place where the corporeal and spiritual meet, or are cleaved apart. here, the space between narrative and documentary, fact and fiction, is literally scratched between two voices, also cleaved apart or brought beside. jayne love reads a text i wrote for her––short sentences on the concept of the horizon and the briefest suggestion of narrative collide with pieces of richard (oswan) williams' beautiful, rum-fueled living room sermons to me. i lived, for a few months, in richard, and his wife mary’s, apartment, the site of their voodoo spiritual temple in new orleans. of course, as priests and priestesses richard and mary spoke often of death, transcendence, ethics and health. our days were slow and filled with philosophical rumination, richard, a brilliant old man schooling a young wandering wonderer. i recorded most everything on cassette tapes back then and some of those have made it here to the present. to this horizon we’re at now.

Stephanie Barber is a writer and artist who has created a poetic, conceptual and philosophical body of work in a variety of media, often literary/visual hybrids that dissolve boundaries between narrative, essay and dialectic works. Her work considers the basic philosophical questions of human and non-human existence (its morbidity, profundity and banality) with play and humor. Her videos are distributed by Video Data Bank and her films can be found at Canyon Cinema and Fandor.com. Her haiku collection Status Update Vol. 1 was published in the fall of 2019 by CTRL+P and her full length play Trial in the Woods was published by Plays Inverse in August 2021.

Non Fictional Tale (NFT), Jurgis Lietunovas, 06:46 min
When we’re walking on the street or in the forest and we decide to pick up a strange object or a beautiful rock, we enter a moment of fragility, our self becomes porous and we've just crossed into the liminal zone between ourselves and the other. What gets lost is our past self as we form yet another connection in our mind. We lose and we gain. But what if we looked at this moment the other way around, and would instead say that something discovered us, lured us in, guided us, and helped to solidify who we are by making it evident what we look at? Let us imagine that we’re next to someone who is stepping into a lived-in cave, touching its walls and appreciating the history that they have witnessed, let us listen as they lean down to pick up a rock to tell us how they feel about it.. And finally, let’s become porous to nature’s way of speaking to us and absorb its simple gifts, as we're resting from a hard day of work or maybe instead, what we call - existence.

Jurgis Lietunovas a Graphic Design graduate from the Gerrit Rietveld Academy in Amsterdam tunes in to listening to objects that on first sight seem to have no agency or voice, diving into what feels like another ontological realm - a surreal parallel track that runs like a shadow behind the ordinary every day. He’s interested in presence that is not strictly physical but, rather something that exists in time. It can be presence of feelings, memory, history or a whisper of an inanimate object. He researches the above mentioned by re-creating real places in CGI and enacting “interpreted” scenarios or stories to build a present emotional dimension that hopefully sheds some light on contemporary narratives of myth making.

The Spirit Keepers of Makuta’ay, Yen-Chao Lin, 11:02 min
Shot on location in the traditional Amis territory, The Spirit Keepers of Makuta’ay travels through villages on the east coast of Taiwan, where nature, colonization and population migration merge to create a unique spiritual landscape. The hand processed super 8 unravels mixed faith expressions from Daoist ritual possession to Presbyterian funeral, from personal prayers to collective resistance, all the while attempting to trace the memories of past Amis sorcerers.

AJAW Q’IJ, Chiara Faggionato, 15 min
The Council of Nicaea (325 AD) declared that the Christian Easter would be celebrated on the Sunday following the first full moon of spring. Spring begins between the 20th and the 21st of March, coinciding with the astronomical Equinox. Thus, in Guatemala, two festivities of two different cultures and spiritualties are celebrated at the same time.

Chiara Faggionato is an Italian visual artist, photographer and filmmaker currently based in Berlin, where she is currently a MFA student at the Art in Context Institut - UdK. Her visual projects are researched-based and reflect on the separation between man and nature - culture and nature, as result of the capitalist and catholic western society.